This week is nice. Finally now that I’ve gotten my first supperclub out of the way I can get back to enjoying classes at the cookery school. No more sneaking off for an hour to buy orange tomatoes, in theory this week is something I can relax into…

Except that on Monday I killed my first creature… Well no, once again a slightly misleading statement… I’ve stepped on insects (unknowingly), dumped a bowl of prawns into boiling water, fished mackerel but this was the first time I took a knife and plunged it into the central nervous system of a creature that just moments before was blinking at me. Because crabs blink. And that was the most unnerving thing about the whole thing. That, and the fact it struggled so hard when I tried to hold it down… Not that I’ll turn vegetarian because of it, quite the opposite in fact – I feel absolutely obliged to eat all of the crab dish that we make from it. None of my crab will be going into the bin (you’d be surprised- maybe horrified- at the amount of food we each end up taking home and, quite frankly, chucking out).

Anyway, using quite a lot of force, I finally managed to plunge the oyster shuck knife into the part underneath the crab’s flap under which its central nervous system lies. An interesting thing about crabs is that you can’t boil them alive even if you wanted to because its natural defence mechanism is to shed its limbs and not killing the crab before boiling makes the meat tough. 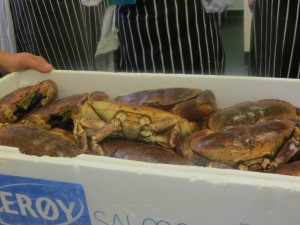 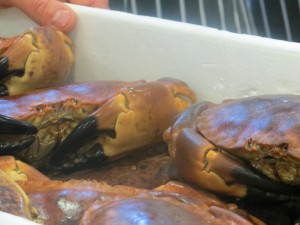 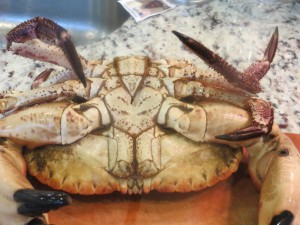 Crab cakes on Thursday will be made from the picked crab. I shall dutifully eat every last morsel. Not that that’s a tough ask you understand, its just that we usually make so much food, and much of it is  enough to feed four so there really aren’t enough days in the week to get though all the food that we make.

For example, this Tuesday we not only killed the crabs but we made yogurt pannacotta with poached figs and we cooked pork fillet en papilotte with celeriac dauphinoise and made cookie dough (a good portion of which was consumed by me before it even reached the fridge). We ate the pork and some tiramisu (that out tutor had demonstrated the making of) for lunch and later the pannacotta as a… post dessert-dessert…

After picking our crab (which involves merrily pulling out the crab fresh from the cavities and legs of the crab and then spending the same amount of time again, searching for any shell that has fallen into the bits of meat) we were free to make our lunch. Starting with pork en papilotte. 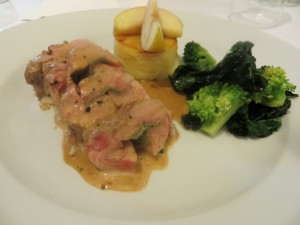 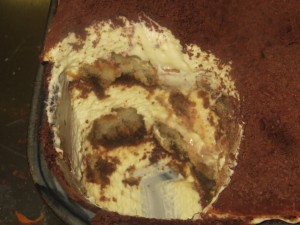 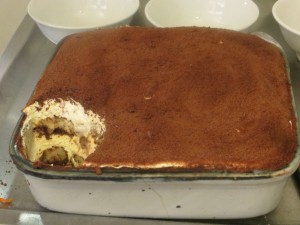 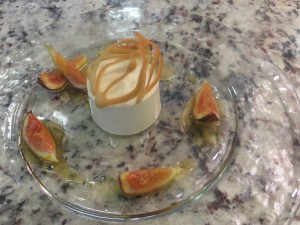 On Wednesday we had a wonderful pork Holstein with a runny duck egg and anchovies. Apparently the anchovies are traditionally added at the end although, never having heard of this dish, its not a garnish I’m fastidiously attached to.

Although actually the anchovies did add a moorish salty note to a lovely dish. It was a very filling main (I haven’t shown you the rest of the pork escalope that hid out of sight of the photo but then jumped onto the plate soon and then was gobbled up by me. Passion fruit and mango eton mess after this. 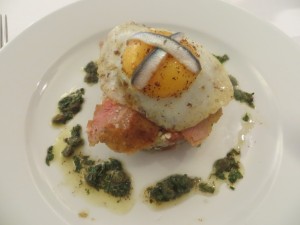 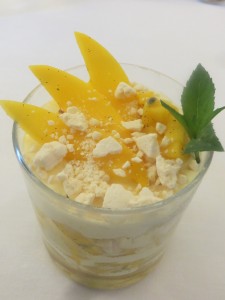 You should have seen the roast pork bell with roast veg and cauliflower cheese that we made. Oh wait.. Let me upload the picture. 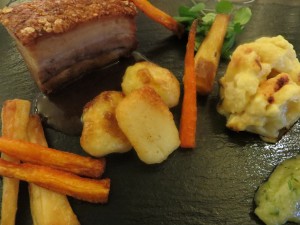 We took home with us that day and I made that my dinner. 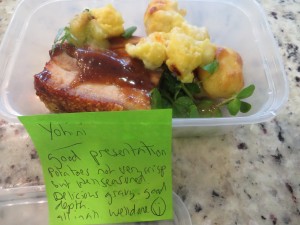