Poor chronological ordering of my posts mean that I’m posting about my supperclub preparations already having done the supperclub and being pleased with the result. Thus, no suspense, no anticipation. Much overrated emotions I find, I’m happy with my current emotional state of “pleased its all over”… Anyway, in keeping with my undying devotion to every mindnumbing detail of everything everywhere, I’m duty-bound to give you a run down of the crazy prep going on the weekend of the supperclub,

So first thing on Friday, I took the pork out of its brine. For anyone who’s interested (and you should be interested because brine is a miracle technique that makes for fabulous meat), I used an equilibrium brine of 5%, and added some brown sugar, juniper, black pepper, coriander, garlic, onion, orange and lemon rind and fruit. Oh and then I threw in some pineapple as an afterthought because I’ve read that its a good meat tenderiser. You can see how cloudy the brined became after I’d removed the pork belly, this is because the brine acts to leech out the blood from the animal which improves the flavour and moisture of the meat. 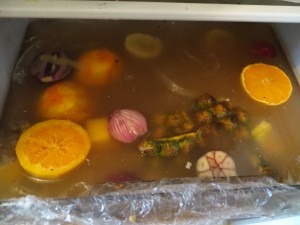 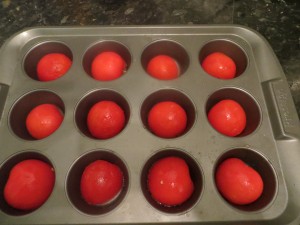 The next (painful) part of the evening was to smoke the quails eggs. I boiled the eggs for 150 seconds having left the eggs to warm to room temperature. Smoking food takes place at whatever temperature the environment is so given the spectacularly warm few weeks we’ve had, I’ve had to wait until nighttime for cooler temperatures to prevail. This involves me setting the smoker up on the roof around midnight and coming up every two hours or so to check that the firestarter hasn’t blown out… 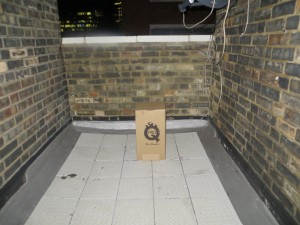 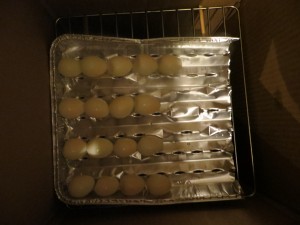 I was planning to make the bread dough on the Saturday night and let it prove in the fridge overnight.  Apparently, the longer fermentation also improves the flavour of the bread. However come Saturday night I had zilch fridge space so it was instead a 6am start on Sunday morning to get my bread going.

Turned out nicely though. 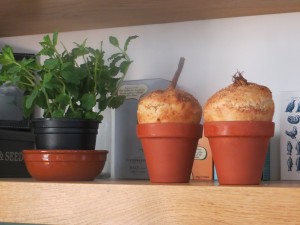 I pickled my carrots and radishes on the Saturday afternoon as I only wanted a short pickling time. I pickled the mushrooms the week before however and actually I think the texture would have been better if I had also pickled them the day before instead. 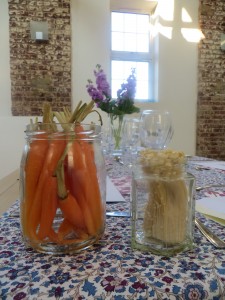 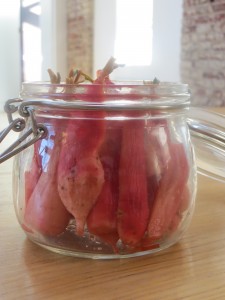 Pea soup was made on Saturday and frozen immediately to preserve the greenness. However as lovely as it looked freshly made, on defrosting I had to sieve it a second time because it looked grainy. Thinking about it now I think I should have either made it on the day or I should have used a whisk or blender to bliz the pea particles so that it suspended in the liquid (which is probably why the soup appeared so smooth when it was freshly made). 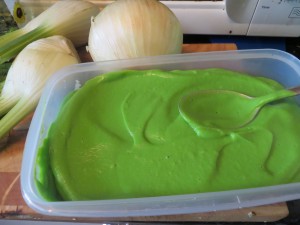 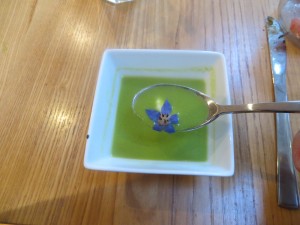 I wish I’d taken more picture of the preparations! The garlic tuilles, the chocolate meringues, the pork once confited, the spectacular orange and red beetroot puree!  Ah well,,,, There is always next time. In fact, Sunday August 25th to be precise.