I’m thinking that I should get more imaginative about my post headings. “Week 1″, “Week 2″… I might as well head each post with the day’s date. But then, don’t newspapers employ special people to think up good headlines – no not the journalists – other people, headline specialists. You can see why I might legitimately find it tough then… Today was about filleting Plaice and making goujons. Well that’s what mattered to me today. We also made treacle tart, spelt bread and sweetcorn a la Francaise (which, given the other main ingredient was chorizo, seems to be labouring under a misapprehension of being French) and we finished off the caramelised onion soup (both with respect to the cooking and the eating of it). But today, I was pretty damn proud of my filleting fish. 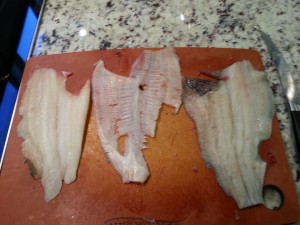 Let’s be clear, I’m not saying it was pretty, but it wasn’t ugly either and it is a skill and I now have it. Or at least a basic form of it which will improve with practice (actually given that I’m posting this 10 days late, I’ve filleted three further fish since then but let’s not get ahead of ourselves). And the other thing I really liked was that today focused a lot about the presentation of food. I love that. Afterall, in terms of taste, I like to think that nothing would leave my kitchen unless I thought it tasted great, but dining out is often about more than that. It should about celebrating the occasion, and the theatre of presenting food is part of what elevates food from something delicious to something special. Maybe that’s going too far, in fact I have plenty of friends who would think what I’ve just said is silly but at the very least its a chance for chefs/cooks to be creative which suits me fine. With the gougons, we presented them in a kind of preserve jar, and the tatare sauce was placed in another (preserve?) jar. 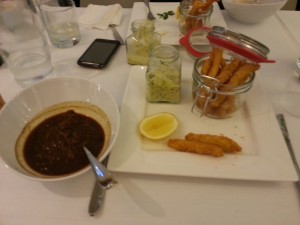 I really liked the look of it (including the way that our tutor cut his lemon for his example dish) but if I were being picky, I don’t think the props suited the dish. I mean, what have preserve jars got to do with fish? But it did get me thinking about presentation generally. Could you present the goujons in newspaper, or a little fried potato net, or am I being too fussy and fish in jam jars would generally raise no eyebrows? Actually I’ve also seen fishcakes served in a fancy conical bowl with a mound of piped bright green parsley mayonnaise which looked tempting and could work with gougons?

Another cute thing we did today was make spelt bread, both, in the traditional loaf style but we also baked some of the dough in small flowerpots.

It’s such adorable thing, I’d be so excited to receive bread like that (I was quite happy making bread like that too). Of course, in keeping with my fastidiousness on the use of “relevant” props, I decorated the top of the flowerpot spelt with sunflower seeds only and not the other sesame seeds on offer, because what have sesame seeds got to do with plant pots? Although having said that, my coursemates who did use a mix of seeds ended up with prettier bread than me… what to do?

Anyway, I was thinking about doing little flowerpot bread for the July supperclub. Just need to find some flowerpots…