I actually wasn’t looking forward to Monday. I’d come back 11pm the Sunday night from London, preparing for my supperclub and looking though the list of things we were making I wasn’t too excited. “Trim lamb” “Pea and Ham Soup” “Fruit Salad”. “Trimming lamb” sounds like you’re just going to square the sides of a chunk of meat and soups and fruit salads scream diet food to me (unfairly because the amount of cream and butter we’ve stuck into our soups over the past few weeks should totally explode the myth).

Anyway actually, it was a good day. Trimming lamb means skinning the belly of the lamb, trimming it off any excess fat and taking the meat off the rib bones. Then we stuffed it and tied it. So its not about squaring the sides of the meat at all. Well, I guess it is a little bit.

Pea and Ham soup was actually really interesting because the recipe involved making a pea soup and serving it with an island of ham in the middle. One of my intermediary courses for the July supperclub is a pea soup so I was avidly engaged throughout. Apologies to my coursemates who had to endure 10 minutes off me quizzing our tutors about the best way to keep the pea green colour. Soup was lovely though and tastier the next day also. We made a roux for the pea soup which admittedly I’d never thought off? Call me new fashioned but I prefer the consistency of my soup to come from the texture of the vegetables rather than the thickening of the flour globules. Although having said that, it was a useful technique to learn and actually the end product was good so I might experiment with it in the future. 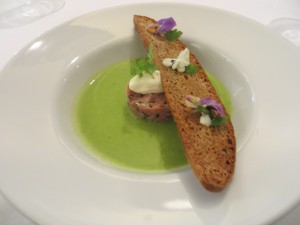 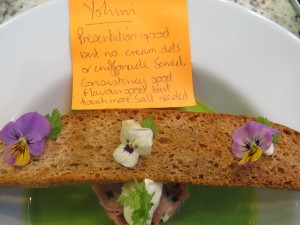 The fruit salad and the accompanying sabayon was a chance to work on presentation skills. Doing the presentation work is the point at which I feel most cheffy and it was good to be able to make such a simple dish look like  dish that you would serve at a high end restaurant.  Its a bit like magic really. 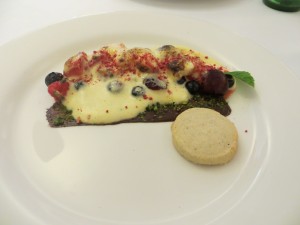