So at the end of the evening for my July supperclub, I’d like to offer fudge. Disconcertingly I have recently found out that fudge is an American invention (which doesn’t sit well with my supperclub theme) but let’s just keep that between you and me. The rest of the world I hope will just associate it with the Clotted Cream counties.

I have fond memories of fudge being a perfectly simple thing to make. The fond, and admittedly vague, memories involve my mum putting a tin of condensed milk in a pan of boiling water. After a long time it became fudge. After a really really long time, it became toffee. Since then, I have come to the conclusion the practice of Fudge is a true skill. This discovery is a recent one, obviously, because if I’d known the trouble in store, I’d never have put it on the supperclub menu. So four fudge attempts later what have I learnt?

Fudge is like (non-gelatine based) Turkish Delight, there are no good recipes out there on the internet. I’m not saying that the plethora of recipes out there are bad but they rarely seem to envisage the multitude of things that can go wrong. Reading a recipe is like a description of an alternative universe, it’ll talk of thickening, gloss, setting, losing shine, rolling boil – and all the while you are staring at your mix of (at various times) inert milky beige water, a spluttering volcanic lava of dark toffee, planks of black crust sailing across your pan, wondering when you’ll hit the “soft boil stage”. Anyway after looking at different sites, I pieced together all the different things I was doing wrong and finally got my perfect fudge. Far be it from me to presume to provide a recipe for fudge but for my reference at least I can set out the recipe and my personal “troubleshooting guide”.

vanilla pod (or in my case, smoked raisins)

1) Prepare a 15cm x15cm cake tin or glass square dish (which is what I used) by lining it with buttered greaseproof. You need to do this now, you will have zero time once the fudge is ready. The tin will look smaller than you need but trust me, your fudge will reduce down.

2) Bung everything apart from the vanilla into a large saucepan (which should be at least twice as big as the mix).

2) Heat gently until the butter has melted fully into the mix. You don’t really need to stir at this point provided that you’ve already mixed the sugar into the evaporated milk so that it doesn’t sit at the bottom of the pan and caramalise separately. 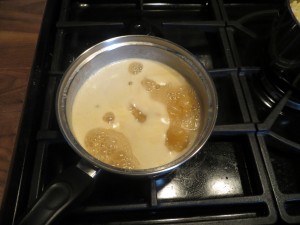 3) Once you have a pale coloured liquid of the mixed up ingredients, whack the heat up and watching it start to bubble. 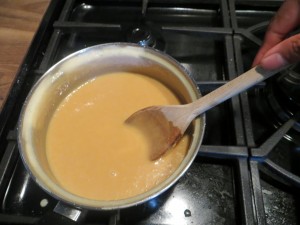 4) Stir occasionally. No need to go mad, once a minute should be fine at early stages when the mix is still thin and liquidy. In fact if I’m being honest with myself I had a 10 minute shower when the mix first started boiling (this was during my fourth and successful attempt – promise). It does take a while for anything interesting to start happening and if you’re fudge watching from the beginning, you run the very real risk of removing it from the heat too early, in panicked excitement before its really ready. I personally think you don’t need to stir it at all for the first 10 minutes, and then just a little occasional stirring until it really starts to thicken (and the risk of the bottom of the pan burning becomes rather real). 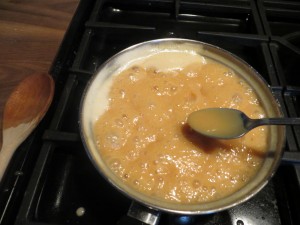 5) 15 minutes later it should be ready. It should reach the soft boil stage meaning that when you drop the mixture in the water, it basically sets into fudge in the water. Sets like proper fudge I mean, not watery or mushy fudge but fudge just how you’d want to eat it. The stuff in your pan should look like fudge left out in the sun too long. When the fudge is ready to be taken of the heat, there should be no doubt in your mind about whether it is ready because it should really look like molten fudge.

6) At this point turn off the heat and pause briefly while it stops bubbling. Then start stirring the fudge with a wooden spoon. You don’t need to go mad here, you’re just preventing crystals forming, you should do this for about 5 minutes. I read that you need to do it until the mixture thickens and loses its gloss. But my mix at this point is already thick and it didn’t really ever loose its shine. However it did create a lovely smooth grained fudge anyway so just beat it for 5 minutes and I think you’ve worked hard enough to deserve a nice fine grain.

7) If you forgot to stir the pan while it was boiling or are concerned that the bottom of the pan has burnt, I would transfer the contents from the original pan to a new one before starting to stir the mix again, this is so you don’t pick up the black from the bottom of the burnt pan when you’re stirring the fudge mix. Alternatively you could be a more vigilant stirrer than me.

8) Once stirred and getting cool to the point that you have to spoon the mix into the tray because it doesn’t pour well (although it should have just enough give to sigh itself into your prepared dish and fill out the corners), then stop stirring and put into your tray.

9) Leave to set, it should be evident within an hour that it is setting. 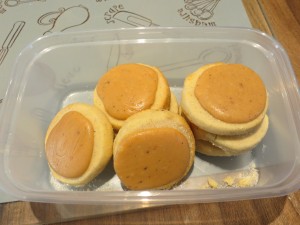 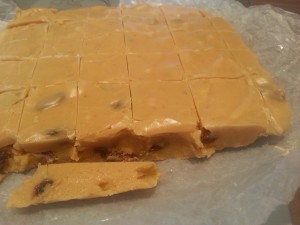